in the beginning: a response 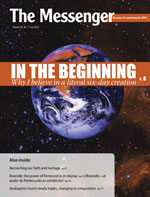 Recently, in their monthly publication, The Messenger, the Evangelical Mennonite Conference (EMC) ran a two-part article series by Rick Bettig exploring ideas of science and Scripture, particularly in the area of a literal creation story versus a figurative one. Initially, I was surprised to find such blatant advocacy of one side of the debate, but the subject is increasingly pervasive in scientific and theological circles. In our day and age, with science rising as a god of its own making thanks to the Enlightenment, the question of creation is becoming more and more pertinent. Is the universe divinely designed and created? Or is the reality we know a product of random chance? Have humans evolved or are they never-changing?

Within Christian circles, the debate has no fewer teeth. Christian scientists and philosophers argue over whether Adonai governed the process of evolution or whether He created the universe 'as-is.' There are plenty of resources to adequately defend either side, but there are also plenty of haphazard and desperate attempts at holding traditional perspectives with an icy, frightened death-grip.

Pastor Bettig, in his first article, attempts to establish an introduction of his encounter with science, and how, as he puts it, 'God ultimately used science to draw [him] toward a firm belief in a literal six-day creation.' Throughout this process, Bettig subtley pits science against Christianity in a battle for who holds the most truth; his quest to understand the method by which Adonai created the universe jumps from evolutionary theories to 'biblical' creationism, seemingly placing the two in direct opposition despite his initial conceiving of their compatibility.

The church has an unfortunate history of readily condemning scientific advances in place of holding on to tradition. The Christian physicist, astronomer, mathematician and philosopher Galileo Galilei of the 16th century, for example, was sentenced to indefinite house arrest and was banned of publishing any works simply for defending before the Catholic authorities Nicolaus Copernicus' work on heliocentrism. The reason for the condemnation was 'heresy,' as the notion of the sun moving around the earth seemingly contradicted Scripture passages such as Psalm 93:1, Psalm 96:10, and 1 Chronicles 16:30, which state in various ways that the earth is established upon a firm foundation and will not be moved — or Ecclesiastes 1:5 which notes the sun's movement of rising and setting.

In Pastor Bettig's second article, he blatantly and unabashedly lines evolution and creation up as two conflicting belief systems. To boil the Genesis creation story and a scientific theory down to two contradictory and opposing worldviews does significant harm to both theology and science. Such literal readings of Scripture are actually misreadings, neglecting not only the original context of the passages but also their intended effects, leaving me to conclude that biblical criticism was entirely ignored as a valid scholarly pursuit during the discussion. In particular, form criticism, which attempts to identify a passage's genre and thereby determine its inceptive meaning, seems to have been completely disregarded.

The Hebrew Scriptures consist of a handful of different literary genres, such as poetry, prose, hymns, and genealogy. Many scholars label the first eleven books of Genesis as myth — which is not to be infused with the modern sense we get from it. Myth in this context simply denotes a narrative that is expressed using particular traditional themes and motifs that are different from everyday language and experience — a myth allows a significant event to be told in such a way that the inner meaning and the purpose of the event is conveyed despite not having all the 'scientific facts.'1 They are neither historical, nor anti-historical. Neither scientific, nor anti-scientific.

In this way, to read Genesis 1-3 as a scientific textbook does the brilliance of the Genesis myth an injustice — and creates problems for people trying to faithfully read Scriptures and keep theology relevant amidst modernism's scientific disposition. A myth contains elements of truth, but they are not to be taken as completely factual. Thus, the purpose of the Genesis creation story is not to inform us of the exact method and time-frame with which Adonai created the universe, as Pastor Bettig would have us believe. Nay, the narratives of Genesis 1-3 were initially told as a contrast to circulating creation beliefs that declared multiple dieties and the subordination of humankind under them. Additionally, the stories were told to show that objects such as the sun, the moon and the stars were not dieties in themselves, but were also merely created things of the universe.

The stories depict a world created perfect by a single loving and personal Creator that is then marred by humanity as a result of the freedom given us by said Creator. There is nothing in the Scriptures to suggest a denial of science. In fact, the story of the Bible shows us that Adonai uses people (and animals) from within the world to exact His will — what's to say He can't use systems to bring about His purposes? He did set them in place after all. To say that Adonai used methods such as evolution in no way diminishes the revelatory (and divine) nature of Scripture — the Bible is infallible in the sense that it succesfully portrays Adonai's personality and His concern with not only the human creature but also the entire cosmos.

And so there is plenty of room for science in Christian theology, as we explore the depths of the universe our God has created and placed us in. We forget that early scientists sought to reveal the workings of a created world for its Creator's glory.

Adonai's fingerprint is in the world as much as it is in Scripture — and both must be read carefully and in context. For there is a time and a place for literal readings of Scripture. But the Genesis creation stories are neither.