The story of how the young shepherd boy defeated the warrior beast of a man is perhaps the most famous underdog tale of all time. It has become a timeless tale - a story translatable into any culture, era or challenging situation. The story is a narrative of which we're becoming increasingly aware as the marginalised groups of society slowly but indistinguishably fight their way into the main body of acceptance. 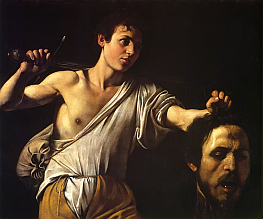 The story of David and Goliath has become, in our culture, synonomous with overcoming the odds. But it has also, like all popularised stories, become diluted.

The other week as I came across this particular passage, I noticed a nuance completely left out of modern retellings.

David is described as the youngest brother of eight who either stays at home to tend to sheep while his brothers follow Saul off to war or is sent by their father to deliver rations - in other words, David is just a boy, not worthy yet in the sight of most. He is scolded by his eldest when he begins inquiring of who the giant Philistine is; he is made out to be a weakling when he can't even wear a soldier's armour; and Goliath outright ridicules his size and youth when David confronts him. Yet, while David is depicted superficially as a small, know-nothing child, the text in fact paints his character as headstrong, cunning, bold - perhaps a bit brash! - and with a fiery zeal for his God.

In verse 37, where David is attempting to convince King Saul he is fit to fight the nine-foot champion of the Philistines, he ends his defense with assurance that '[t]he Lord who delivered me from the paw of the lion and from the paw of the bear will deliver me from the hand of this Philistine.' This is a confident boy standing before the king of a nation - a boy so confident in fact he's willing to do battle with a warrior that no other Israelitie soldier wants to confront. David is confident in his abilities - he is determined - and it all pays off in the end with a glorious victory.

And so 'I can do it' is what we tell ourselves. We are told nothing is impossible despite the odds, despite the fact the situation seems overwhelmingly against us. What we've come to hear from this story is that anything can be accomplished if we set ourselves undividedly to the task. Bullies will fall, institutions will fail, idols will break and all this if we put our minds and bodies to meet the goal. If a shepherd boy like David can kill the giant, so too can the underdog prevail over the favoured competitor; so too can the people topple a corrupt system; so too can all manner of suffering be overcome by the afflicted.

But that's not the point of this story. We hear it so often out of context that we've forgotten what it's saying. The story of David and Goliath is not primarily, as society has come to believe, about the victory of a simple farm boy over a deadly warrior. Nay, the story is strewn with hints as to the direction it intends to go.

Firstly, it is David's righteous indignation that stirs him to action against the defiant giant; he is appalled that not only is this Philistine approaching with the audacity to taunt the Living God's people - and thereby challenge Adonai's own power - but David is also appalled that Goliath has caused his people to cower in fear. Is there no Israelite who would kill this villain? Not even for the riches, the freedom, or the bride? Not even to defend and sanctify the Name and the reputation of Adonai?

Of all the mighty warriors, skilled and experienced, gathered there at Socoh, there is none who dares rebuke Goliath. None, until the boy David comes, whose anger, on behalf of his God's, is kindled against the giant - and the boy takes the challenge to defend Adonai's Name.

Secondly, a contrast is made: the people of Israel cower before this seemingly unstoppable force, brash and brave and defiant before Adonai and his people - disregarding the reputation that likely precedes them. The army of Israel, who had a history of fighting against impropable odds and winning, were shaking in their tents, trembling in the shadows. But David, the little shepherd boy, burns with desire to defend Adonai - so much so that he, a child brash and bold in his own right, confronts the champion.

David prevails over the giant; against the odds he emerges victorious. But his victory is not accomplished merely by human might - symbolised in the rejection of the military outfit1 - but is accomplished by providence - made clear in David's speech to Goliath before the battle where he explicitly states the battle is Adonai's and it is He that will deliver Goliath into David's hands. It is by Adonai's provision and David's trust in Adonai that Goliath is brought down. David may in fact be confident in his abilities, but his confidence lies not in his own physical prowess; instead, it lies in the powers given to him by Adonai. David may have struck down lions and bears, but it was by Adonai's deliverance. And the Philistine will be no different.

Do you see the difference?

This underdog story is not in fact what we think it is. Even though the narrative is part of David's rise to kingship - from rags to riches, from farm to throne - it's not really about David. Although Adonai is only passively present throughout this particular story - mentioned largely as the victim of insult, but also as the hand that delivers yet He's never mentioned as an active character - He does in fact play a major part. It was Adonai who provided David with the capacity to have the speed, accuracy and ingenuity (and possibly the practise) to bring the champion down. This here is another instance of Adonai working alongside a human creature, using his talent and emotion to a certain end.

The story of David and Goliath is not teaching us that it's the determined underdog who prevails. No, the text tells us the winner is the one with a bold enough faith and a deep enough trust in Adonai to step forward and fight - the winner is not the one who stands before the opposition to say defiantly, 'I can do this,' but the one who stands before the opposition and says confidently, 'Adonai has the power to overcome.'

1. Not only does he reject the armour Saul attempts to give him, but in his speech against Goliath, David states he doesn't fight with sword or shield to prove that it is not by his own might that the Philistine is defeated.