the tick as a christian exemplum

In the past few months, my wife and I have watched Hollywood incarnations of two comic book heroes: both Iron Man films as well as both Batman ones. On top of that, I have recently become re-acquainted with an early-teen friend of mine to whom I was first introduced through his mid-nineties television series: The Tick. Thanks to a few gifts, I am a proud owner of the first six issues to the original comic, The Tick, as well as the first two seasons of the TV show. 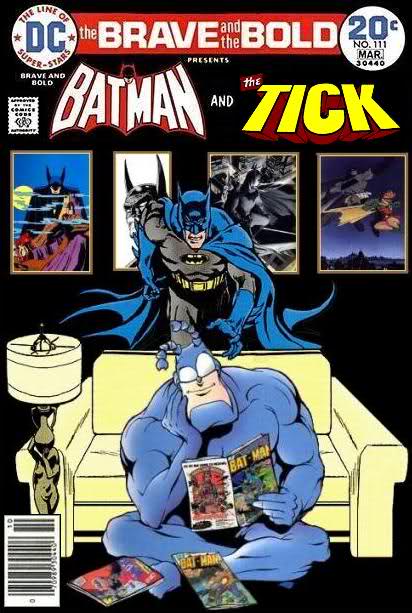 Watching Batman and Iron Man, two simple themes struck me as rather interesting, standing out more so this particular time than others.

First, both heroes have technologies that aid in their quest against villains - Batman has not only his suit,2 but his utility belt of endless utilities, while Iron Man wears a weaponised body-vehicle.3 Batman may have trained himself to nigh-perfection physically and mentally, but he can only do so much without his suit. He is still mortal. And Iron Man? Iron Man is just a man without his iron. Heroes need their technologies (insert here 'special powers,' it's all the same) - they in fact depend upon them.

Secondly, both heroes hide behind a mask. Granted, in the movie version, Tony Stark admits to being Iron Man and draws an incredible amount of attention (to feed his giant ego), but in the comics, for the most part, he hides behind the story of an Iron Man bodyguard. Ostensibly, the masks serve to protect their 'true' identities - their alter egos. However, on a much deeper level, the reverse is in many ways more accurate. 'We suppress the id,' Dr Arthur Neuman tells Stanley Ipkiss in The Mask, 'our darkest desires and adopt a more socially acceptable image.' This rings true for Batman, as Rachel tells Bruce at the end of Batman Begins that the mask is in fact Bruce Wayne while the real face is 'the one that criminals now fear.' A superhero's story is one of hiding among plebeians as one of them, their true identity revealed only when they don the mask and suit. It is never the opposite.

In contrast, The Tick is always in his suit, always wearing his mask, because for him he is The Tick. There is no other persona, no attempt to hide his other identity (except, of course, on covert missions where he dons a necktie) for there is none. The Tick is The Tick; he is completely and wholly a superhero at all times - totally without 'a mild-mannered alter ego.' He goes in fighting, wasting no time to switch modes - he's always On, always ready. His unmatched strength is all he knows, complimenting his somewhat dim wit (yet enormous heart and child-like wisdom), thus his dependence is not upon external aids, but God-given capacities.

Thinking on these things made me wonder: What if (more) Christians were like The Tick and less like Batman?

At times, it seems, Christians feel we can't do something unless we're properly equipped - we need to run back to our phone booths and switch costumes. I know, at least, I often operate this way: I'm never ready to do what I should. I hesitate because I'm not qualified, because I'm not in 'the right state,' because I haven't put my suit on. When I'm called to something I linger at No because I simply don't feel like now is the time; I need to build my arsenal first, get myself ready for the task God may be calling me to do.

Whether it's to teach or to take action or to serve an individual, I feel I need to prepare myself adeqately before I jump in and do it. But this has the danger, at least for me, to lead to lost fruit: I take too long trying to prepare myself that things never get done. I hide from Christian duty and responsibility behind my preparations.

But where there is more danger is in the implication of self-reliance. All this hesitation means we're depending upon our own capacities, our own strengths, our own 'powers' and gadgets.

In Ephesians, Paul exhorts us to be strong in the Lord and in the strength of his power (6:10). We're not to rely on our strength, because our strength is inadequate; instead we're called to rely upon the immeasurable greatness of Adonai's power - a power which raised Jesus from the dead (1:19-20). Paul continues by commanding us to put on not our own precious suits and masks but the whole armour of God because it is the only way we will be able to stand against the darkness. And it is an armour we are to wear not as some Christian alter ego, but as a Jesus-follower day in and day out. 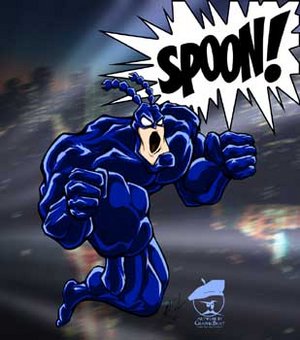 The Tick jumping into action.

We are admonished by Jesus a number of times to always be alert, watchful and ready. Here, Paul elaborates on this notion by paralleling our readiness with that of a Roman soldier - the powerhouses of his time. This analogy is not too far off the mark since we as Christians are, in some ways, superheroes in our own respect. After all, the spirit within us - the same spirit that dwelt within the Anointed One - is a spirit of power, not of cowardice. Indeed, all the resources we as Christian soldiers need are drawn from Adonai and His might.3

Instead of hesitating, pondering our personal preparedness, we should be confident upon the Christian 'suit and mask' Elohim has provided - a uniform with which we Christians are to be constantly outfitted. And so it is with contagious enthusiasm and a gung-ho attitude we should enter into Christian duty and action - even as The Tick tirelessly and endlessly leaps from rooftop to rooftop, eagerly patrolling The City for wrongs to right, or as he violently shakes with restraint when inhibited to act in help. Instead of running back to put on whatever we feel is lacking, we should leap into action with the knowledge that Elohaynu has already equipped us.

When God is for us, what excuse do we have?

1. According to comic-based mythologies, Batman's suit is both fire-retardant and chemical-resistant, fashioned by triple-weave Kevlar, and has a steel-reinforced cowl; similarly, in the movies his suit is allegedly made from Kevlar and titanium-dipped fibres.
2. A real-world theory of Iron Man's suit is that it's a combination of alloys such as nickel-titanium and nitinol - perhaps even a carbon-carbon composite - but I'm not sure what the comics or the movies purported. Some blend of alloys, no doubt.
3. Kenneth L Barker and John R Kohlenberger III, The Expositor's Bible Commentary Abridged Edition: New Testament (Grand Rapids, MI: Zondervan, 1994), 783.