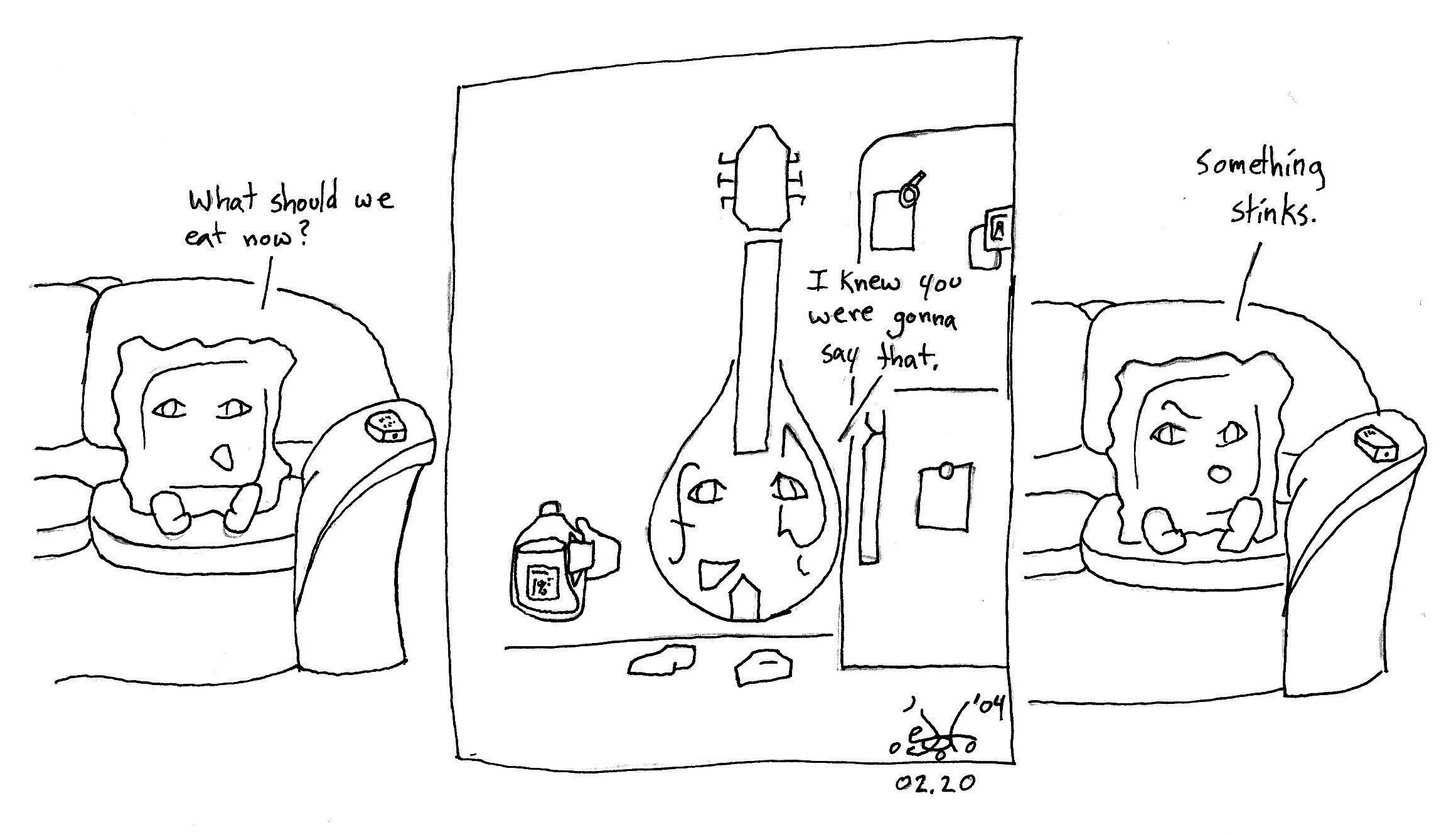 I had to post this. It is an ode to my brother because I wrote this based on true events involving the both of us - that is, most of these comics are actual happenings or at least have beginnings in such. This one especially - it's verbatim.
I realise many of you will not appreciate this humour. That's too bad. I hope some of you can find it at least a little silly.

Daniel is Mandolin Boy; I am Ravioli Head. There are a many good adventures.

a lesson from the animal kingdom

The trouble is, she can't catch them. Two are injured with broken wings and the others are healthy, but appear to be guarding their injured mates . . . . . . It's very common for geese to stay with their injured family members, since they have a very strong family bond, said Henry Murkin, director of conservation programs for Ducks Unlimited.

There are a lot of people who could benefit by learning a thing or two from the family bonds between Canadian geese - and even those of wolves, whom are fiercely loyal to their mates.

toward a theology of banana milk

The spirituality of banana milk begins with the importance of realising that although the flavouring is artificial, it is nevertheless one with the drink itself. That is to say the fruit is not a natural characteristic of the milk, being infused by an outside force, but nevertheless becomes intrinsic of the milk; still, neither the milk nor the flavouring have any value until they are given purpose by something external of themselves. Milk itself is nothing unless used - the calcium can do nothing unless it is consumed to strengthen the bones.

Thus, here we have the nutritional milk on the one hand, and then given, from the other hand, a gift of flavour. But this means nothing unless taken up by the Other and given purpose by being drank. For instance, while people are people, they are nothing in and of themselves. Even when given a gift of flavour - such as leadership or prophecy or the befriending of outcasts - the person has no meaning. Remember that the gift is not ours but is given to us (thus artificial); however in the giving and receiving of it, the gift becomes a reality and in fact intrinsic of us - that is, the gift, when given and used, becomes a fundamental part of our individual definition. Nevertheless, it is only when God takes the jug of humanity and allows it to enter into participation with His own body that the 'flavour' and the personhood of the creature is given any significance at all.

When it sits untouched and unused on the shelf, milk only rots; it must be purchased and lifted up as an oblation to thirst for the swallowing into the body by the will of the other - grabbed by the Divine and allowed, by grace, into Himself - or purpose is never actualised, never acheived, nor is it even given. The milk can do nothing by its own efforts, but instead must be led and moved by something outside of itself, thereby being brought into participation with that other. Likewise, we as humans can ultimately do nothing until empowered to do something. This empowerment can only truly and fully come by the Wholly Other who has made us and, through grace alone, chooses to pursue us, use us and thereby allow us to participate in Himself. Before this participation, the creature is nothing but a directionless vessel with a gift - that is, the milk is nothing but a meaningless jug with a special taste.

Simultaneously, it may very well be us who bring meaning to life - it may be our created existence that brings purpose to creation. What is any of this unless perceived by humanity, for all of this is a gift to us? (But of course perceived properly, through the Spirit and will of God, or it is nothing but a perversity.) Indeed, what is anything in life until it is offered to God by that perception - a perception given freely by a God who loves us and gives us Love? God sets the table, allowing us the freedom and privilege to make it into a meal - a meal shared among us and offered to Him, only properly to Him. A meal that necessarily must, at some point, include a glass of milk - milk, given to us through the cattle that God Himself has made and in turn given to us for use.

It then follows that purpose is given, not found; everything we are and have are gifts; and we only have meaning when we are placed in proper relation with God. Alternatively, God gives us our purpose by granting us to be purpose, and we are wholly and utterly nothing without Him - we are absolutely nothing without His grace, of which we could never deserve, and purpose is lost if not offered up to Him.

Thus, I charge you, take a sip of banana milk so you can taste and see for yourself just how good the Lord is - and give another jug of milk a reason to be.

Because my brother has refused, on several occasions, to chronicle my wisdom, I have decided that the matter must be taken into mine own hands. The very fact that he has not written anything down over the years has only served to prove his jealousy. Or to show that he is in fact the saner of our parents' two sons - but this is certainly preposterous.

I shall begin, because I am bored, with my most classic inventions, which have yet to come into fruition (mostly due to unwarranted scepticism); but you wait and see - one of these days they will be mass produced for your convenience. These works of genius will be given to you not only in ascending practicality, but also in ascending greatness.

4. Central, levitating library.
Forget trying to find a library in your area - and discovering that it doesn't even have all the books you need! With a central library that floats on an island above the city, all you need to do is find the scattered gateways which will transport you, by way of a unique elevator-train, to the only book depository you'll need!

3. Scent-converting underwear.
If you have a lot of flatulence, this is the thing for you! It will change the olfactory properties of the gas emitted as it passes through the membrane of these specially fabricated undergarments so that it smells to any witness like a fruit of your choice! No more shame, guilt or embarrassment! Only the soothing smell of strawberries!

2. A life-sized map.
This map will have the exact distances and sizes as the real thing, only printed out and folded for you to store away. A life-sized map will allow for an incredibly accurate calculation of the time it will take to get any destination! A pop-up, travel version will make getting lost a thing of the past!

1. A dictionary with an index.
Imagine: You have to look up a word; but instead of flipping through endless pages, trying to find that word under section 'i,' you can simply go to the back of the dictionary and easily find that 'incredulous' is on page 715, column 2. Oh, the ease! This is going to save so much time!

Before you close this page, never to return again, I must ask you one thing: Do they purposely make fibre cereals to look like little pieces of poop?